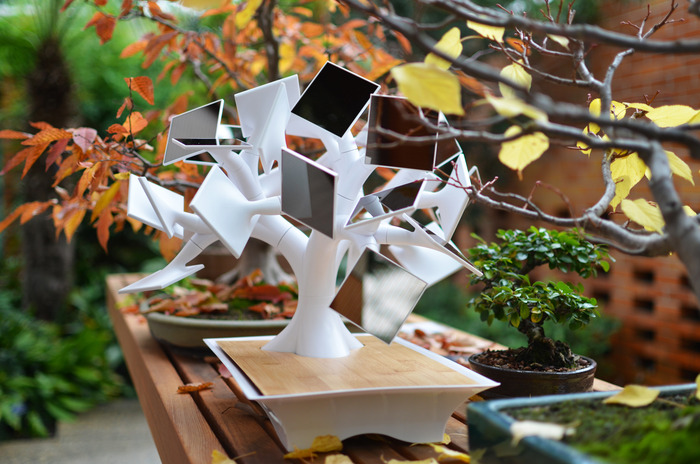 LEGO’s revolutionary robotic and microcontroller education kit Lego Mindstorms NXT,  allows kids to do their first experiments with moving robots by controlling 3 servos and a collection of useful sensors. The kit includes a light sensor, noise sensor, a mechanic bumper and best of all an ultrasonic distance sensor, that works like a charm. You can find my own design for a Lego NTX  controlled telepresence robot here.

As an additional feature owners of the LEGO Mindstorms NXT kit are able to add the components of the Renewable Energy kit as sort of sensors and data loggers. Connected to the Mindstorms NXT brick, the energy meter works as a sensor and can be used for both programming and data logging.

Make’s latest Weekend Project combines two projects into one to create a piece of wearable fashion technology, the Solar Joule Bracelet! A joule (pronounced like “jewel”) is a unit of energy – in this project we’ll be sourcing that energy from the sun with the aid of PIN photodiodes wired in series, which along with a supercapacitor and Schottky diode will function as a solar battery (we built a similar project previously, the Solar USB Charger). This energy will then be stolen by the “joule thief” circuit, consisting of a choke (inductor coil), transistor, capacitor, and resistor all wired together. Oscillations through this circuit will eventually exceed the adjoined LED’s forward voltage rating, causing the LED to shine like a jewel! These oscillations occur in bursts, but once fully charged the oscillations will happen so fast the LED will glow continuously.

Together a solar battery (left) and a “joule thief” (right) power this Weekend Project!

The solid wire loops that connect the PIN photodiodes make perfect eyelets for sewing through, so we mounted ours on a cuff made from salvaged neoprene. Feel free to modify the design and install the circuit where and how you wish, for example on felt, onto a hat, or on your backpack – wherever you want a solar-powered LED!

This weekend Panasonic was sending 100.000 EVERLED light bulbs down the Sumida River in central Tokyo, which made the river shimmer in an amazing shade of blue! The reason was that Panasonic started the Tokyo Hotaru (= firefly) festival by sending these 100K LEDs down the river, in order to look like fireflies as well as to remember the Japanese tradition of floating candles on the water. Panasonic assured that all the candles run on solar power gathered during the daylight and all/most of the LEDs are being catched by a fishernet afterwards. Avoid eating blue glowing fish in Tokyo these days 😉

My original plan for this amp was to make a rather rugged poly-coated wood enclosure that could stand up to being left outside in a light rain. On the other hand, I also wanted to finish my amp by the time that the Minne Maker Faire rolled around. I quickly realized that my woodworking skills were not up to the task of being able to make an amplifier enclosure with the time that I had.

I started looking at what cigar boxes I had on hand. I considered a number of them, but ultimately decided on a Romeo and Julieta box that I picked up at a thrift store. It was a hard choice, because this particular box has some very beautiful cover art on the lid (inside and out), and I would have to cover it up with the solar panel. I decided to cover it up with the solar panel anyway, because I could see the original artwork when I opened up the lid.

The Solar Stella is a variant of John’s Stella Amp kit that he sells.

Look at MAKE’s latest weekend project, which are two solar-powered BEAM bots. Generally, BEAM stands for Biology, Electronics, Aesthetics, and Mechanics. From Wikipedia: “This is a term that refers to a style of robotics that primarily uses simple analogue circuits, such as comparators, instead of a microprocessor in order to produce an unusually simple design (in comparison to traditional mobile robots) that trades flexibility for robustness and efficiency in performing the task for which it was designed.”
I love these two cute solar-powered creature bots, see the video below:

Makezine latest Weekend Project will have you exploring the field of BEAM robotics, which… wait, did that Symet just move on its own accord? Yes, these BEAM Solar Chariots have a mind of their own! Well not really a mind, more like a nervous system that stores up solar power and then discharges it, producing movement. Inspired by nature, BEAM stands for Biology, Electronics, Aesthetics, and Mechanics, which both informs and inspires BEAM design and function. The Solar Roller and Symet both use the same circuit design, dubbed “solar engine,” named so for deriving its energy from solar light. With various technoscrap parts — we salvaged ours from an old micro-cassette player – and common components (transistors, resistors, LED, and capacitors) hooked up to a solar cell, you can build one of these little critters!

The Solar Roller move forward with bursts of energy, while the Symet spins around on its DC motor’s axle. Watch the video below to see both these vehicle being built and in action, then head over to the project page to start making your own BEAM critters!

See all of the Weekend Projects posts