In line with the publication of the 51th production version of TabShop Retail Point of Sale App last week, TabShop was also submitted to the SAMSUNG 2013 App Challenge. Between September 5 and 30 November 2013 SAMSUNG opened an App challenge specifically for Galaxy Note HD Apps.

TabShop version 51 comes with some major improvements and a new possibility to add stock updates directly within the inventory screen. The sorting of items was improved and some extra reports were added within the daily Point of Sale business report.

apps4austria is a federal Austrian Challenge to create mobile Apps by using Open Government Data archives. These archives contain all kind of information that could be used by a wider public community, such as location of waste collection centers, tourism information, public statistics or public building information.

The challenge emphasises the design of apps that are using these kind of publicly available information and visualizations. Its even possible to submit concepts and ideas without concrete implementation. The submission of apps4austria is due to 1.march 2013!

Plant Link, recently started to fetch funding on Kickstarter tries to make your gardening a little bit smarter than usual. The inventors of Plant Link promise that by using their smart plant monitoring device even the biggest plant killers get a green thumb.
Plant Link is a hardware device that monitors the water needs of your lawn, garden, or house plants. It alerts you on your iPhone when your plants need to be watered and can even water them for you, at least for a while. Plant Link is designed for indoor as well as for outdoor use, just put it  beside a plant you would like to monitor. Plant Link is then acting as the ‘Big Brother’ for your plants as it is configured and paired exactly for one type of your plants, as each family of plants has different needs. It is even possible to log into the Blog of your plant to see if they are doing well or not. Plant Link perfectly follows the actual trend of green gardening technologies.

Its no surprise that the adorable lean product design of Misfit’s Shine personal activity tracker catched so much public attention that its Indiegogo pledge for funding reached nearly  $700.000 and exeeded its target value by around 600%! Misfit Shine is designed as a waterprove, durable and very light personal device that you can wear even if you go hiking or swimming. Shine is carved out of solid steel within one piece and wirelessly transmits your activity information onto your iPhone. In order to sync your devices data, just lay your Shine on your iPhone.

Misfit Shine offers a lean interaction design by just showing a circle of tiny leds that indicate your potion of activity for your day. The Misfit Shine personal activity tracking device now also is shipped in sleek matte black, which gives it an additional exclusive touch.

PopSLITE is a project on Indiegogo.com that collects crowd funds in order to design a second eInk screen cover for your iPhone. According to the fact that eInk displays need much less energy that traditional LCD type screens, this cover is a cool idea for consuming ebooks and reading material. eInk screen also offer perfect contrast in direct sunlight without the glean effect. Since the popSLATE screen is ultra-low-power, it is always on. This opens up a bunch of new application possibilities, such as urgent notifications, sports scores, maps, notes, calendar, talking points—you name it—will now be available at a glance.
I especially love the idea of constantly showing a street map on the back of your phone. 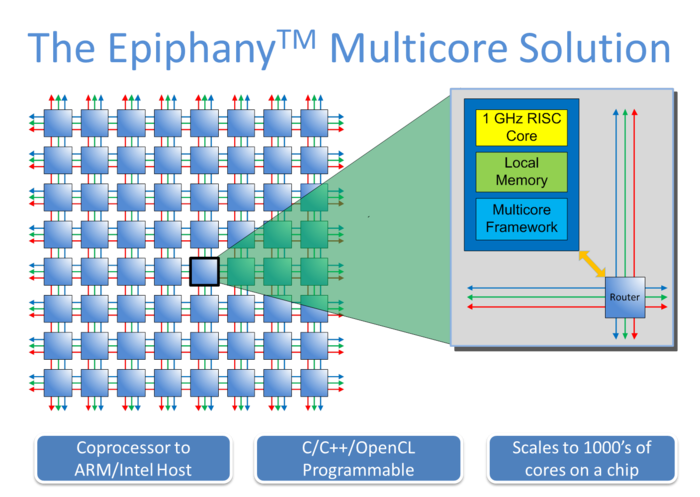 Now the Startup Adapteva plans to develop a basic open source platform for prallel computing. Adapteva calls the project Parallella Project, which represents a hardware platform with a proprietary Epiphany-CPU that supports from 16 up to 6 parallel RISC CPUs cores. Two Cortex-A9 cores are responsible for management tasks.
Adapteva just started a Kickstarter pledge in order to reach a budget of $750.000, in order to produce and ship the hardware. Twine, one of the first Kickstarter projects dealing with specific hardware to connect sensors and aktuators with the Internet, is starting to ship the first bundles these days. For around $100 you can buy a Twine box, that is shown above, that offers WLAN and a multitude of different sensors to check the status of your house or any other real world object you can think of. It runs on two batteries that should offer enough energy to keep Twine up for more than two month.

Another interesting feature is the Web interface Twine offers for specifying event condition action rules for reacting on user defined situations, without programming. The Web interface and ECA rules look quite similar to Microsoft’s On{X} Android App, which we discussed some month ago.

At the inaugural Shared Learning Collaboration (SLC) Camp in Chicago that was launched past weekend with over 100 attendees participating in content tagging and coding applications, $75,000 bounties for 2 open-source applications were announced. The Shared Learning Collaboration Camp was started by Stephen Coller, who heads up SLC Vendor and Developer engagement and blogs regularly on this spot, delivered the vision of the SLC and the opportunities it further creates for personalized learning. The keynote was followed by a lively panel discussion with four teachers that shared the challenges they faced in today’s classroom using data and technology. You can find all the Camps slide presentations on slideshare.

Announced on Saturday morning by partner lead Victor Alcantara, SLC launched a bounty program for two open-source applications at $75,000 each.  These two apps were identified through teacher and school administrator focus groups across multiple school districts.  The first application, Student Data Aggregation Calculator, gives teachers and school administrators a tool to create views of aggregate sets of student data based on a flag that they can define and put in the data set (example flags might be “Honor Roll” or “After School Program Graduates”).  The second application, Student Groups Tool, would help teachers to create groups of students and then view the data for that group.  Proposals are due October 2, 2012 and the selected applications will be announced at the SLC Camp in New York the weekend of October 20th and 21st, 2012.  The applications themselves should be completed no later than January 15, 2013.  More details about the SLC bounty program can be found here.

TangiBot, the latest clone design of the popular Makerbot 3D printer, should offer the same performance and features as the original printer, by 33% reduced costs. Matt Strong, the creator of the clone MakerBot 3D printer Kickstarter pledge, tries to rise 500K $ for his project. Matt describes himself as an 3D printing enthusiast who is creating and printing stuff since several years now. TangiBot is one of the latest initiatives in the hyped area of desktop fabrication. Citing Kickstarter you can TangiBot for 1.254 bucks directly shipped to your door worldwide. The TangiBot prints anything you can imagine out of ABS plastic (and PLA).  ABS is the same plastic used in Lego. You can design your own parts using free tools like tinkerCAD.com or Google Sketchup.

Platforms like Tingiverse offer thousands of open source 3D printing designs for all kind of purposes, ranging from play figures to machinery parts.

Beside the hyped 3D printing technology other similar projects try to establish desktop assembly and fabrication. PopFab for example implements a portable multitool robot for assembly and processing steps such as drilling, painting or even customized toolheads.