Within the last weeks I did prepare a completely new help and tutorial page for all our TabShop users, which can be found here:

The help page is focused on how to solve typical Point of Sale (POS) related use-cases within TabShop. Examples are how to define your own product stock lists, how to checkout and print an invoice and how to change the appearance of your TabShop Android Point of Sale system.

The help page will grow in terms of content over the next couple of weeks and cover more and more use-cases for mobile cashiers.

TabShop began in 2012, when it was first published in Google Play store. Back then, I could not imagine how popular this Android application would become.

The app came a long way, adding feature after feature and battling with competitors such as Square POS for place one in Android Play Store year over year.

Recently, TabShop returned to its original single app strategy and removed the PRO version from Pay Store. Instead in-app upgrade to PRO mode is offered directly within the application. This allows users a more seamless conversion between free and Pro version without switching the app.

To celebrate the 500.000 TabShop downloads, we created a new intro video. 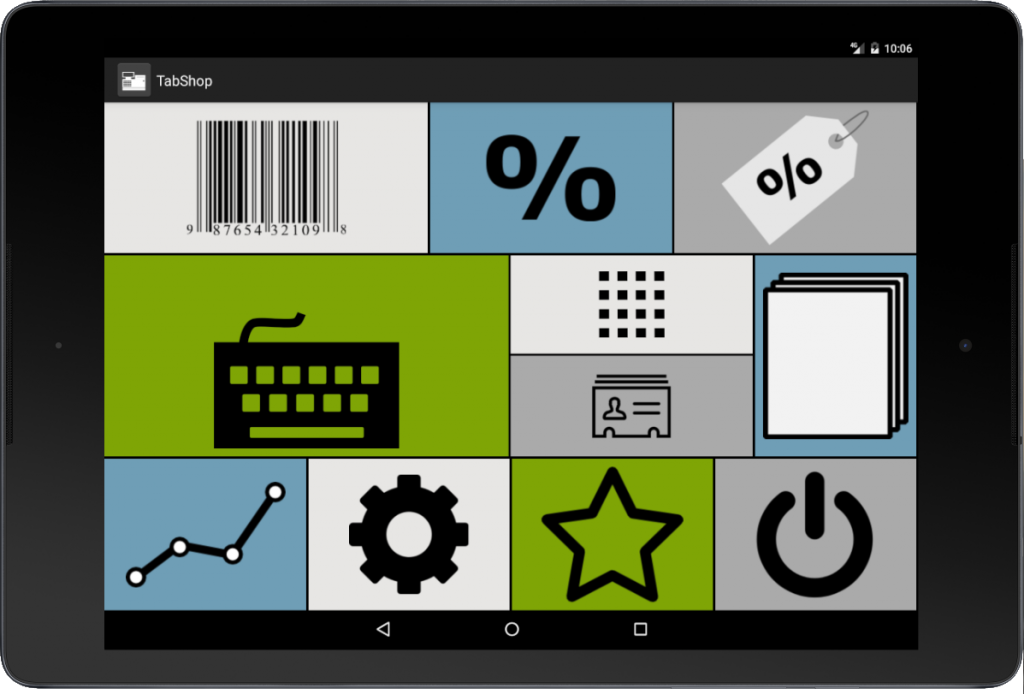 The brand new release 127 of TabShop, the popular free Android Point of Sale system, now adds some new features around the topic of managing customer accounts and customer balances. TabShop now directly supports typical hotel room and checkout scenarios in which customers are consuming services and products during their stay directly onto their room account and checkout the entire invoice when they leave. Another now supported scenario is to buy a value balance for a customer account (e.g. school kids, sports club members) and further on checkout invoices based on that positive value balance without involving any money. With version 127 the popular TabShop cashier and POS system further enhances its already huge list of features by adding customer account management. Don’t hesitate, TabShop is free and without ads, so try it out now.

Whenever you manage a mobile kiosk, a ticketing counter or simply organizing a trade faire booth you have to think about how to conveniently charge credit cards and to print invoices for your customers. TabShop point of sale is the right solution for exactly that purpose. By using Stripe payment processing TabShop pos offers all that functionality directly on your Android phone. TabShop not only lets you check out any credit card payment by using Stripe but moreover represents your entire shop management system right on your own Android mobile phone. By using a Bluetooth thermo printer you can directly print invoices for your customers after you charged your customers credit cards by using global Stripe card processing. By integrating multiple payment and credit processing platforms, TabShop is one of the most flexible mobile point of sale systems right on your Android phone or tablet. And the best thing is, Stripe credit card processing is available also within the free TabShop app version. 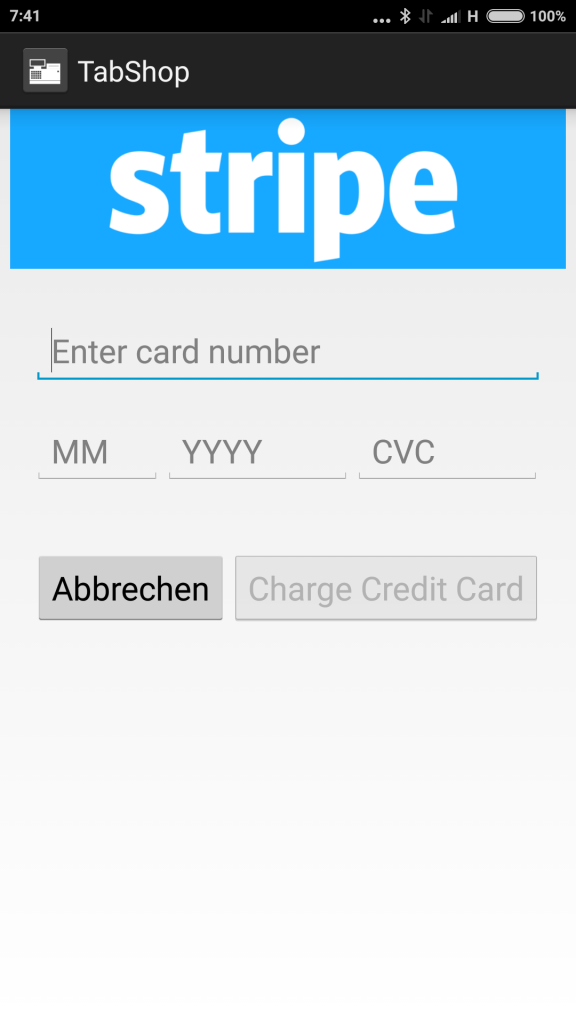 Within TabShop you can set and add any number of decimal stock and even define your products as backorder stock. In case that you sell and manage decimal amounts of stock TabShop shop management allows you to type a decimal number by using the number field within cashier screen and then press the specific product accordingly. TabShop stock management then correctly subtracts that amount of stock from your inventory.

TabShop the mobile Point of Sale app on Android devices underwent huge performance increases in order to easily handle a stock of more than 50K products directly within your pocket. By using your Android phone you keep track of your stock, scan products EAN barcodes on the go and print customer invoices. Organize your stock within categories and set taxes and discounts directly onto the products. Keep track of your daily profits and sold stock and export the invoicing data as CSV exports directly into your favored business analytics tool, such as Tableau software. 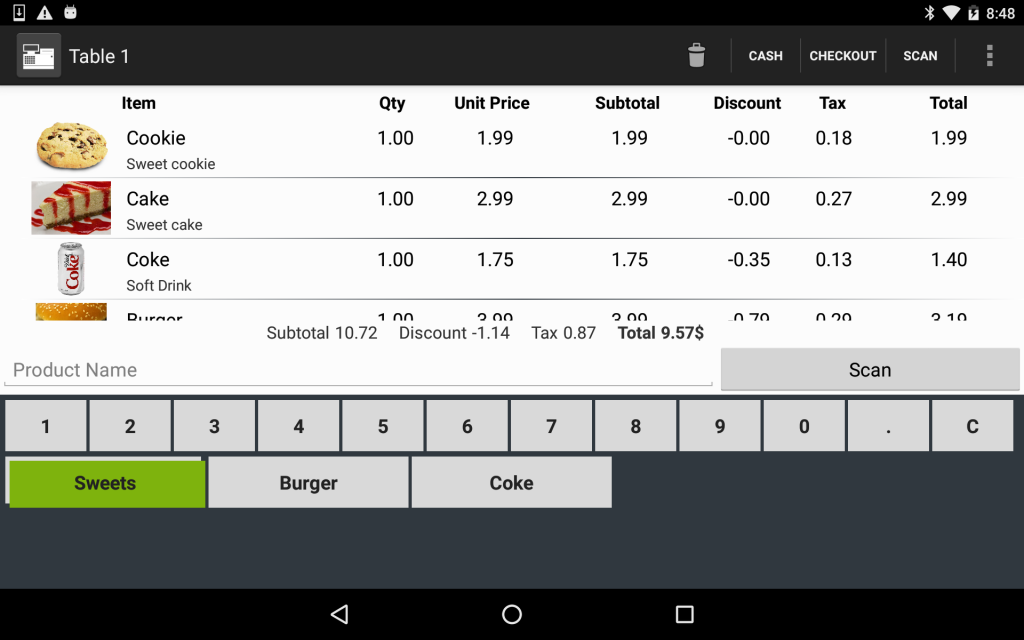 Etsy is a wonderful place for offering your handmade products, such as paintings, arts and sculptures, clothing, old books, vintage or even handmade furniture. Millions of individual businesses are offering their incredible products within this global marketplace. The Etsy team did a wonderful job to bring together all theses small business owners that you normally only meet at community markets in order to show and present their very individual talents. In order to honor the Etsy style of business community TabShop is now also offering a way to import your Etsy product stock list. So you save a lot of time importing your Etsy stock into TabShop whenever you leave your shop in order to offer your products in a mobile kiosk. TabShop helps you to keep track of your profit and stock while you are on the go and to print invoices for your customers. By using the TabShop Etsy stock importer we make TabShop the perfect mobile companion Point of Sale (POS) and invoice printing, product barcode scanning system right within your pocket. 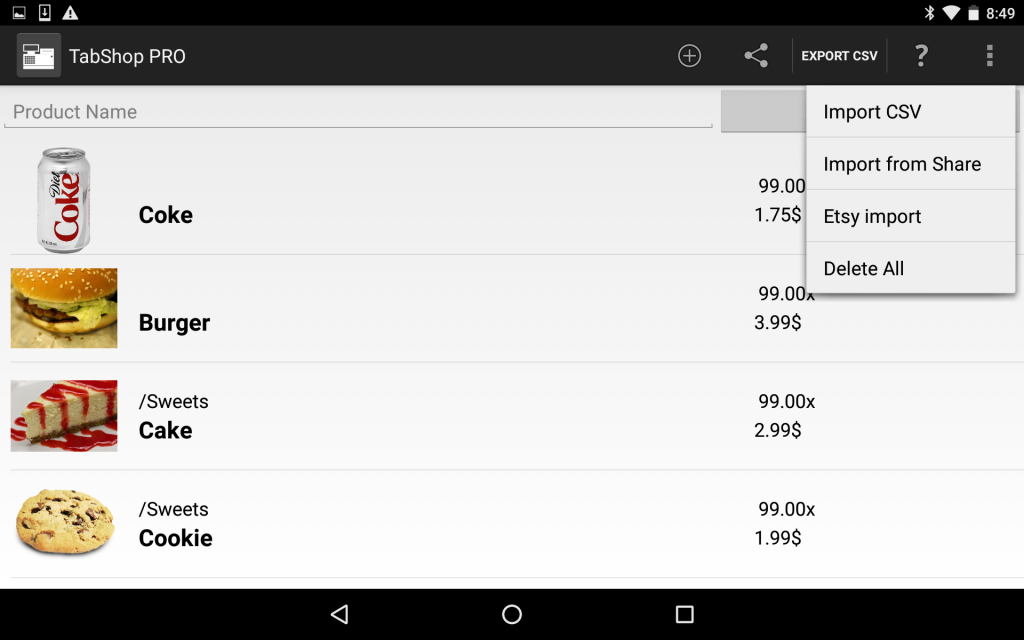 TabShop the free Android tablet and phone till and shop management app celebrates its third year within the Android play store. With over 35K users worldwide and 250K downloads during these three years TabShop stays on top of the Android business app charts. TabShop offers a flexible and modern way to personalize his own business and to checkout invoices no matter where you are offering your products or services. TabShop point of sales rich feature set allows its use within a broad spectrum of business from mobile kiosks to restaurants and bars. 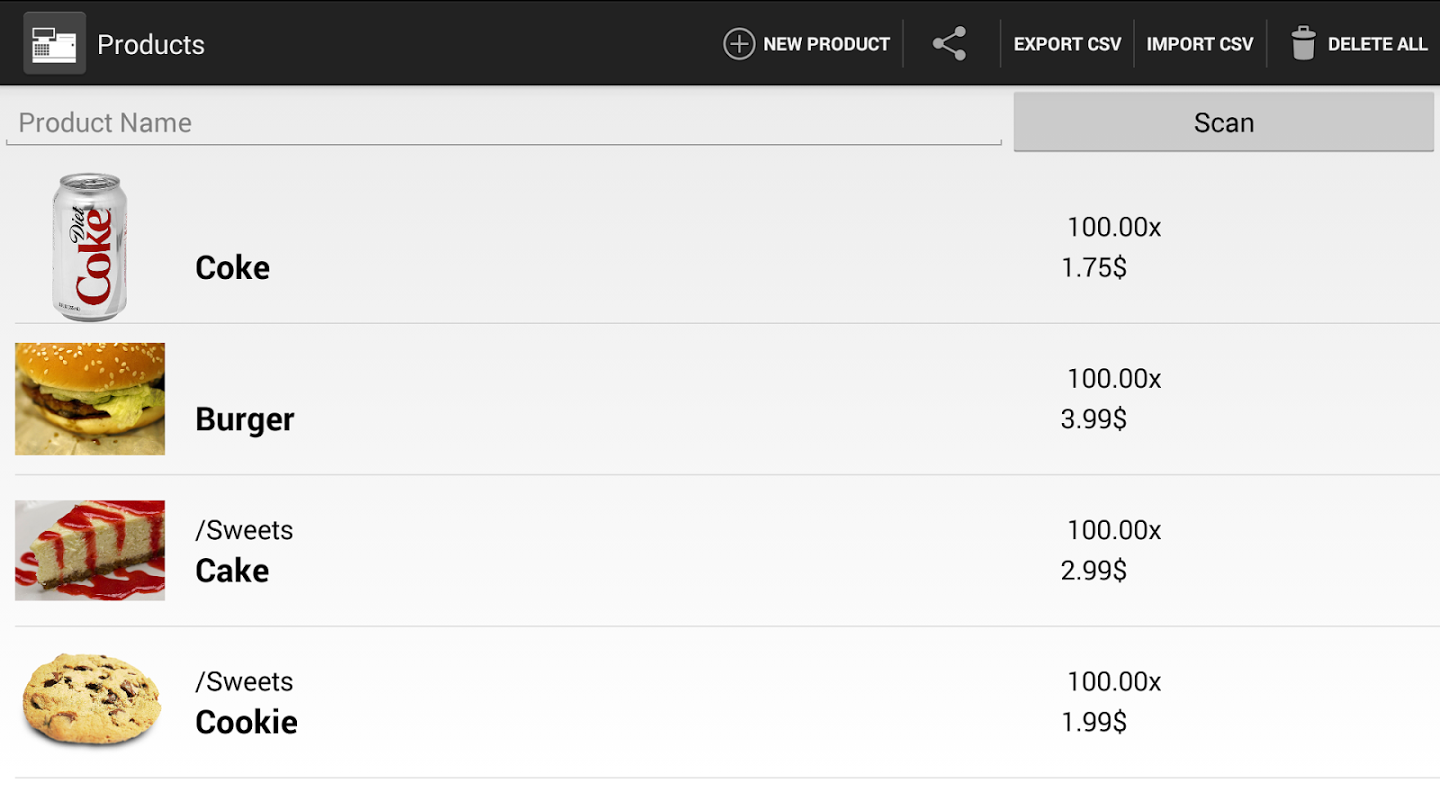 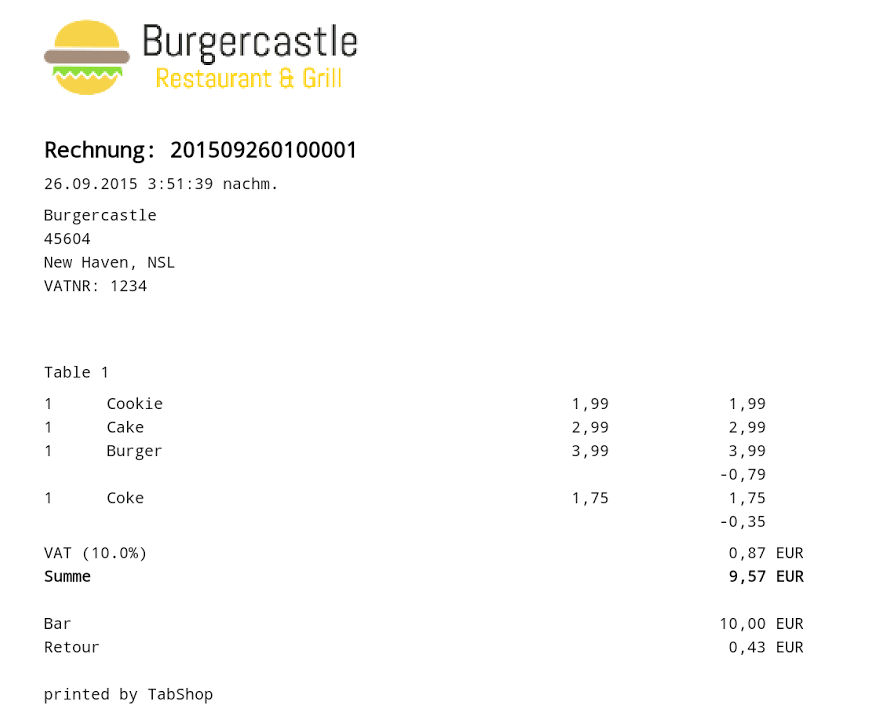 TabShop, the free Android Point of Sale (POS) App offers an intuitive way to organize your small or medium sized business. By customizing the local taxes and discounts and by supporting a multitude of different languages TabShop is perfectly ready for your individual local business. The TabShop cashier App also offers good support for QR codes as well as Bitcoin payments. By offering an open server interface, TabShop also supports your individual server backend integration. TabShop therefore is the perfect solution for your own shop, business, retail market, kiosk or simply your shop and stock management in your pocket.