Eiki Martinson published a really cool senior university project, where he and his team implemented a Pipe Crawler robot. Pipe inspection definitely is one of those specialized killer apps of robotics, like exploring space, recently search and rescue within radioactive facilities or mowing the lawn, that have spawned a remarkable number of experimental attempts, working machines for industry, and even (in the case of mowing the lawn) consumer products. Examples of pipe-crawling robots pop up every couple of months in the popular scientific magazines. To distinguish their approch from other already existing efforts, they decided that the machine should be able to travel through horizontal segments, around corners, and straight up. This last requirement rules out a simple rover or wheeled cart. To maintain itself in a vertical section, the robot has to press wheels against the sides of the pipe by mechanical means (ruling out serpentine or inchworm mechanisms—but these also have to press something at least against the walls). They selected a radial arrangement of three sprung wheels. The robot would consist of many such units, articulated like a railroad train, so that it could negotiate corners. 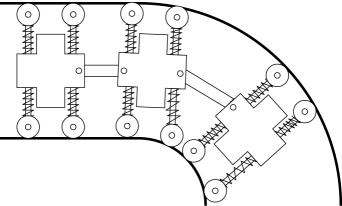 A really nice work, despite the fact that it was finished in 2003. The online documentation of the work is really good and worth reading.