PopSLITE is a project on Indiegogo.com that collects crowd funds in order to design a second eInk screen cover for your iPhone. According to the fact that eInk displays need much less energy that traditional LCD type screens, this cover is a cool idea for consuming ebooks and reading material. eInk screen also offer perfect contrast in direct sunlight without the glean effect. Since the popSLATE screen is ultra-low-power, it is always on. This opens up a bunch of new application possibilities, such as urgent notifications, sports scores, maps, notes, calendar, talking points—you name it—will now be available at a glance.
I especially love the idea of constantly showing a street map on the back of your phone.

Txtr, one of the leading European ebook marketplaces, recently announced txtrbeagle a low end external eInk reading device. By offering no cable connection, no WLAN and only Bluetooth to connect to a specific Smartphone-App that converts and transmits books in raw image format, the txtrbeagle dispenses a powerful CPU as well as power consumpting multimedia features. This low energy strategy allows extremly long periods of operation with just two AAA batteries and a price around 10 Euro. txtrbeagle offers a resolution of 800×600 and an internal 4GB storage, which is enough for storing 5 books in raw image format. According to it’s extreme low price as well as it’s easy connectability to smartphones, several companies already announced ideas to use txtrbeagle as external eInk display for various application scenarios.

Look at this nice project by the Breakfast NY team, where they enhanced a dot display to run super fast with 15 times higher speed than normal. This dot display is 23 foot long and 12 feet high and made up of 44,000 dots. The dots move by using electromagnets to flip from black to white, comparable to modern eInk displays, and passerby can interact with the display through their body movement.

Greg Friedland of San Francisco, CA, wrote in with his 32-square-foot LED matrix.

The lights in the Aurora consist of a grid of 544 RGB LEDs capable of ~16 million colors attached to a 4′ by 8′ wood board. The LEDs are controlled by a microcontroller, which is in turn controlled by a program running on a laptop. The computer is the brain of the system, being responsible for creating the graphics that appear on the wall, and the microcontroller relays the messages to the LEDs. The PC software connects to software running on an iPad, which allows interaction with the moving patterns. Also, the Aurora has a mode where the builtin programs respond to music, bouncing and flashing with the beat, turning it into a VJ of sorts.

The french inventor Michel David implemented a volumetric display prototype. The 3D image is created by a projecting light on a spinning helical vane. He is also citing a previous work on helical displays: FELIX 3D display, and this 2002 paper from the FELIX 3D folks traces the technology as far back as 1958. Michel puts the cost of his machine at €40, and though his results are definitely proof-of-concept quality (beside i find it really funny that he uses a Dremel-Tool to rotate the axis, i owe one myself 😉 ). Some comments on the project state that the prototype itself ‘looks like a DaVinci sketch.’, which i would also agree on.

Look at this nice clay sculpture by Ben Hollis and Eva Funderburgh who chose an unusual material to house their Arduino in. The porcelain gives off a soft glow in staggered rhythms provided by the super bright LEDs underneath the nodules.

Arduino is used more and more by arts and design projects to implement some physical computing applications. It’s easy and intuitive way of programming microcontrollers is a welcomed opportunity for non programmers to model some physical enabled applications. You  can light some multicolor LEDs, read out sensor values of all kinds and control all sorts of actuators, such as stepper motors, brushless motors, linear motors and many more.

Watch this amazing project by Michael LaGrasta, who brought his DeskLights ambient notification system to Maker Faire Bay Area this year. He uses an Arduino Uno Ethernet and 160 RGB LEDs, which can change the color according to notifications received over the network. With the use of flashing patterns, light location and color he visualizes incoming email, calendar alerts.

The next big innovation in touchscreen technology could be the possibility to morph elements out of the screen in order to give human hands some sort of haptic and tactile feedback. Tactus Technology, a Fremont, California-based start-up, Tactus is a deformable layer that sits on top of a touchscreen sensor and display.

Tactus uses a layer which is about 0.75mm to 1mm thick and which contains a deformable, clear layer 200 nm thick top side. Beneath the clear layer a fluid travels through micro-channels and is pushed up through tiny holes, deforming the clear layer to create buttons or shapes. The buttons or patterns remain for however long they are needed, just for a few seconds or for hours when you’re using your iPad to write that novel. And because the fluid is trapped inside the buttons, they can remain for however long without additional power consumption.

Its time for a special post on Geek Fashion and on wearable smart technology which you embed within your everday clothing. Several makers have published amazing pieces of technology enabled clothing, so that i find it time to show some nice examples. The School of Design, Faculty of Architecture and Design, Victoria University of Wellington for example established a specific course for wearable technology. Out of this course some stundents published really cool pieces such as Emily Steel‘s Little Slide Dress:

The Little Slide Dress is a modern take on the classic Little Black Dress. It uses modern technology and blends it with a 100-year-old medium, film. The Dress draws inspiration from classic movies and the ‘magic of film’ to create a wearable piece of technology and art. With film light is so important in the creation and viewing of images and this was one of the driving forces behind the dress’s creation. With film only see what really going on once the lights go out. For this to work there needs to be a balance of projected and ambient light something the Little Slide Dress tries to emulate.

The dress is constructed out of individual slide film images that are backed with LED’s. An Arduino Lilypad connected to a light sensor controls the brightness of the LED’s. The sensor reads the how much ambient light there is and uses this value to determine if the LED’s will be off or on. When there is lots of light the LED’s are off and it looks like a shiny black dress with small hints that something else is going on. Once the sensor determines there is the right amount of light for LED’s to be seen in their full brightness it turns them on. When the dress is on the lights slowly pulse and the images on the dress come alive. [Emily Steel]

Another interesting piece of work, by Matthew Everitt is Tank opT, which represents a wearable technology project which uses light and fashion to explore the relationship between the personal and social aspects of mp3 players.

Tank opT is a tank top/shirt made from high quality cotton flannel. Embedded within the shirt are Fibre Optics and LED’s which vary in brightness according to the music the wearer of the shirt is playing. The idea of the shirt is to create a more social aspect to listening to your personal music player. However, not to make it so social that it fully breaks the personal aspect of it. The user plugs their mp3 player in along with their headphones so that they can listen to the music. The shirt has two modes. Firstly, the more structured, strobe effect that is a visualiser for the music that runs up the buttons. Secondly, the subtler, beautiful look that uses fibre optics on the shoulders that pulse to music. These two aspects make the shirt unisex, the strobe LED’s on the front account for the more male style and the softer fibre optics on the back the more feminine style.

Another work by Jessica Christini shows a neck corsett that glows. S.O.S. is a crafted leather and boning corset designed to be worn around the neck. Installed in between the leather petals and lining are 40 LEDs that glow and are more active the darker the area the wearer is. 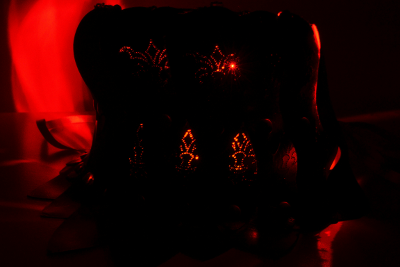 NEWARK, N.J. (AP) — She smiles, answers questions and can guide you to the nearest restroom or to your connecting flight. But don’t try to shake her hand. That’s because “she” is an avatar, the latest high-tech venture at the three major airports in the New York City area. The Port Authority of New York and New Jersey unveiled the device Monday at Newark and La Guardia airports. Those two, along with JFK, will be the first airports in North America to get an avatar this summer. The Port Authority is renting them for about $180,000 for six months. They cost about $250,000 each. According to the Port Authority, more than 100 million travelers pass through the three airports annually.