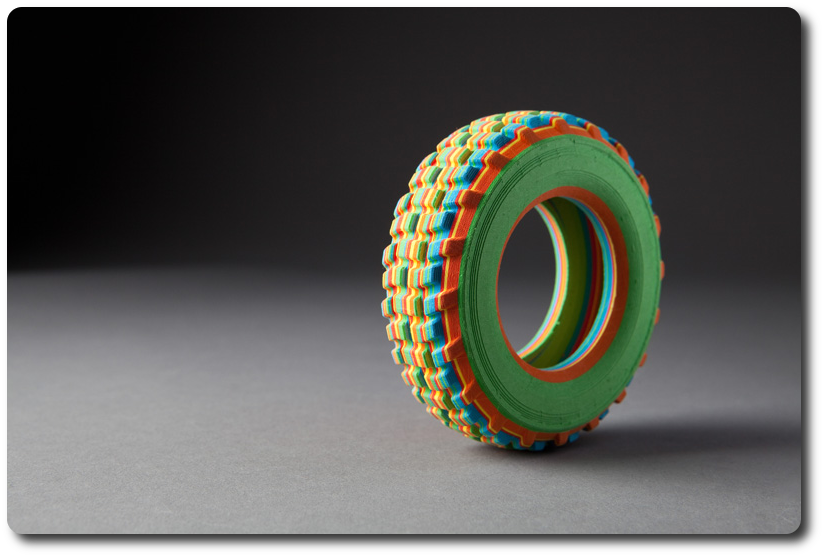 Mcor Technologies recently published a paper printing 3D printer, that allows to print complex 3D objects out of paper, as you can see within the video below. While most popular 3D printer use some kind of plastic molding, like MakerBot, Eventorbot or Tangibot, the Paper 3D Printer – the Matrix 300 uses paper as the basic forming material. Therefore the material costs are still up to 50 times less expensive than traditional plastic molding. The process uses A4 paper and a water based adhesive which makes the output eco-friendly.

If you’ve own an iPad, you can now use it’s camera to capture 3D objects using Autodesk’s new 123D Catch app for the iPad. It is similar to Autodesk’s desktop software with the same name. Just take a series of photographs of an object or setting and upload them to a server. The service will then compile a fully textured 3D model for display and manipulation.

Leap Motion just published its new gesture control technology earlier this week, along with videos showing the system tracking ten fingers. The producer claims that the Leap is 200 times more accurate than existing technology. The idea for this technology was invented during a Phd work in mathematics from UNC and while studying in fluid mechanics. After four years of research and many iterations of hardware, the Leap was finally finished. The Leap is an optical system that tracks your fingers with infrared LEDs and cameras in a way unlike any other motion control tech. This new method of motion sensing is why the Leap can be made so cheaply and come in such a small package. It can track hundreds of thousands of points at a time (note: point tracking isn’t how it functions), and because its precision scales up or down according to the hardware it’s connected to, it only uses one to two percent of a CPU’s capabilities to work.

This isn’t a game system that roughly maps your hand movements.  The Leap technology is 200 times more accurate than anything else on the market — at any price point. Just about the size of a flash drive, the Leap can distinguish your individual fingers and track your movements down to a 1/100th of a millimeter.

ZeroN is an unbelievable cool device by Jinha Lee from Hiroshi Ishii’s MIT Media Lab Tangible Media Group. Image if materials could defy gravity, so that we could leave them suspended anywhere in mid-air? ZeroN is about liberating materials from the constraints of space and time by blending the physical and digital world.
ZeroN is a new physical/digital interaction element that can be levitated and moved freely by computer in a three dimensional space. Both the computer and people can move the ZeroN simultaneously. In doing so, people and computers can physically interact with one another in 3D space. Users are invited to place or move the ZeroN just as they can place any other objects on surfaces. Once levitated, ZeroN’s behavior can be digitally programmed. For example, users can place the sun above physical objects to cast digital shadows, or place a planet that will start revolving based on simulated physical conditions.

ZeroN can remember how it has been moved. Physical motions of people can be collected in this medium to preserve and play them back indefinitely. When the users move and release the ZeroN, it continues to float and starts to move along the same path. This allows a unique, tangible record of a user’s physical presence and motion.