Microsoft’s publication of a new Android App on{X} (yes its no typo, Microsoft published an Android exclusive App) App for automating context-sensitive tasks with the use of simple user defined scripts (called recipes) was quite a surprise for me. on{X} (pronounced like ‘on-ex’) lets you control and extend the capabilities of your Android phone using a JavaScript API to remotely program it. These recipes are much the same approach i published within my PhD thesis, except the fact that in my work they were called rules (ECA = Event Condition Action Rules). Its good to see that finally this idea of letting users customize their smart devices to react context-aware on user defined situations, got general acceptance by big players like Microsoft. 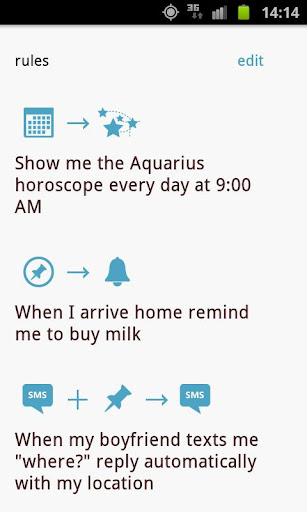 So i downloaded on{X} from Google Play Marketplace ( i was one of the first 500 who already did that, which is quite amazing for a Microsoft App) and i started to create my first simple recipes/rules (its a little bit strange that these little snipplets of code are called recipes, but on the website and within the app they are called rules):

If you login to the on{x} website you get an overview of already uploaded rules/recipes on your smartphone. You can decide to either use a predefined rule that was already designed by the community or you can create your own context-rules.

I chose a very simple predefined rule which shows hello world when you are unlocking your phone:

I uploaded the new rule to my phone and voila, whenever i unlock my phone i get a hello world message in the notification bar.

Now i tried to create a more useful rule, which should show me the traffic jam messages when i start to drive my way home. So first have to set a trigger on a change in my way of transportation like this:

then i have to check the traffic feeds and show the result in the notification area like that:

So the parts combined resulted in a new recipe which i uploaded to my phone and looks like that:

If you would like to try on{X} for yourself and to discover some new rules, scan the QR code and go on testing…

If you have any cool rules or suggestions, please feel free to post them as comments below.