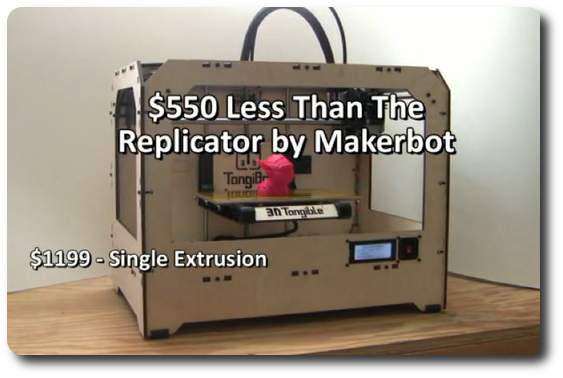 TangiBot, the latest clone design of the popular Makerbot 3D printer, should offer the same performance and features as the original printer, by 33% reduced costs. Matt Strong, the creator of the clone MakerBot 3D printer Kickstarter pledge, tries to rise 500K $ for his project. Matt describes himself as an 3D printing enthusiast who is creating and printing stuff since several years now. TangiBot is one of the latest initiatives in the hyped area of desktop fabrication. Citing Kickstarter you can TangiBot for 1.254 bucks directly shipped to your door worldwide. The TangiBot prints anything you can imagine out of ABS plastic (and PLA).  ABS is the same plastic used in Lego. You can design your own parts using free tools like tinkerCAD.com or Google Sketchup.

Platforms like Tingiverse offer thousands of open source 3D printing designs for all kind of purposes, ranging from play figures to machinery parts.

Beside the hyped 3D printing technology other similar projects try to establish desktop assembly and fabrication. PopFab for example implements a portable multitool robot for assembly and processing steps such as drilling, painting or even customized toolheads.